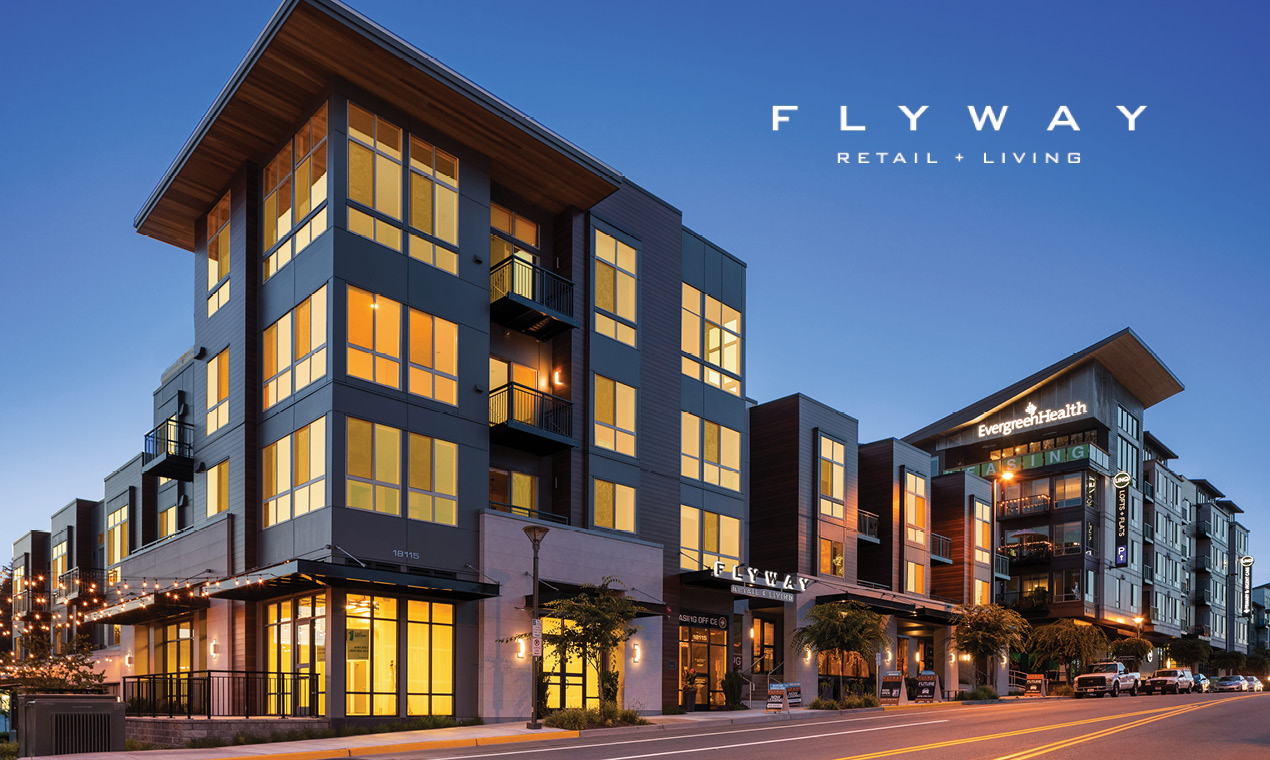 The Flyway Nominated as a Finalist in NAIOPWA Awards

In this year’s 2020 NAIOP Washington Night of the Stars Awards program, The Flyway in Kenmore, Washington, has been nominated as a finalist in the category of Multifamily Residential Development of the Year: Fewer than 100 Units.

The Flyway is the last piece of the puzzle completing Downtown Kenmore's all new Town Square. Located immediately adjacent to the City of Kenmore's The Hangar, an open community facility designed for public use and gathering, the project also shares the Town Square with the community's local go-to restaurant, Seaplane Kitchen + Bar. The Flyway introduces 27 modern urban apartment homes with 5,000 square feet of ground floor commercial space, contributing to the transformation and sense of arrival along the City's main arterial corridor. This new mixed-use building also adds to the approachable, open and connected atmosphere of the Town Square, building upon the interior pedestrian connections of the Kenmore Village block and beyond. 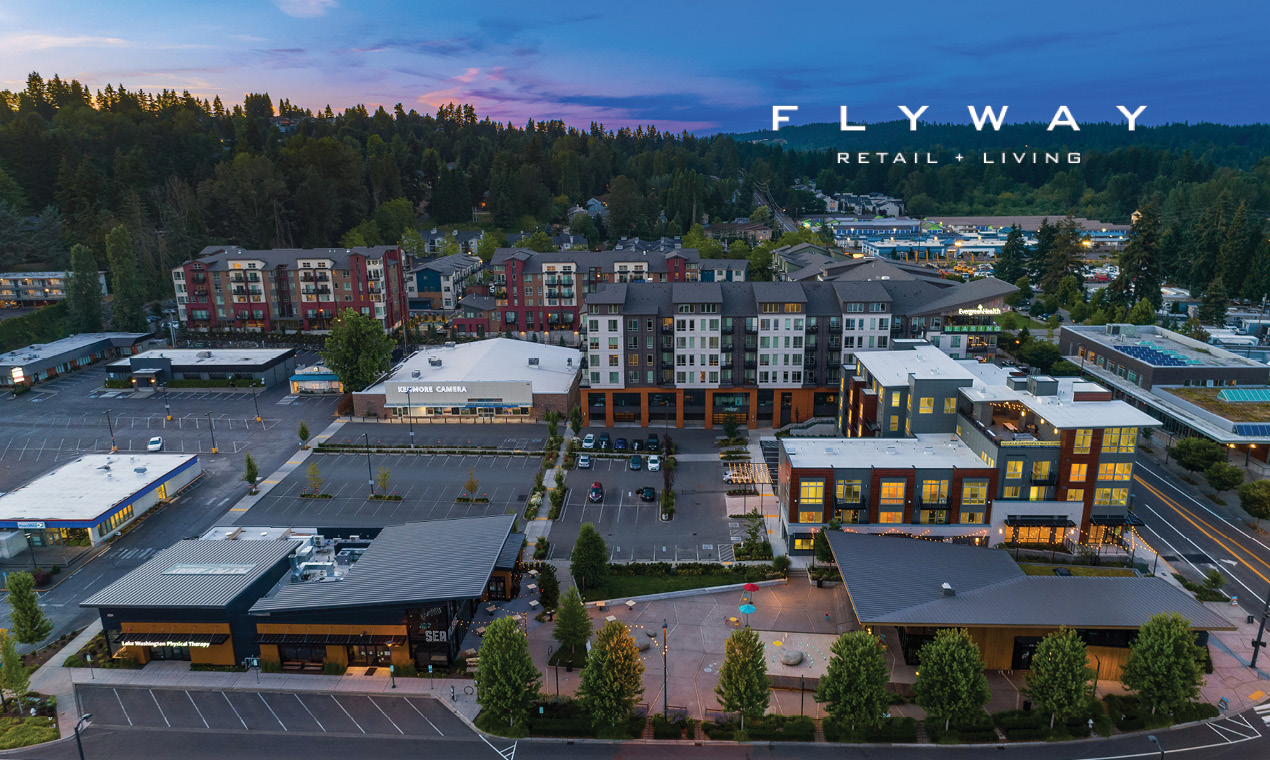 Becoming Downtown Kenmore: The Success of a Public/Private Partnership and Strategic Civic Investment

The creation of Downtown Kenmore has been in the making for nearly two decades, beginning with the adoption of a Downtown Plan by the City of Kenmore in 2003, followed by the assembly of properties to the area that would define Kenmore Village today. Over the next decade, Kenmore made substantial infrastructure improvements and created a civic presence by delivering centralized iconic civic projects that would be a catalyst for change, including a brand new City Hall with civic plaza and skatepark, public library, town square and ultimately, revealing The Hangar.

To introduce housing to Kenmore Village, the City entered into a strategic and successful public/private partnership with MainStreet Property Group who invested over $100 million to help create the urban residential character of downtown. MainStreet has delivered nearly 500 housing units to the downtown area since; The Flyway being its fourth project completed just in the past five years with DAHLIN as its architect on The LINQ, The Spencer 68, Seaplane Kitchen + Bar and finally, The Flyway.

NAIOP Washington Night of the Stars Awards winners will be announced on November 6th, 2020. 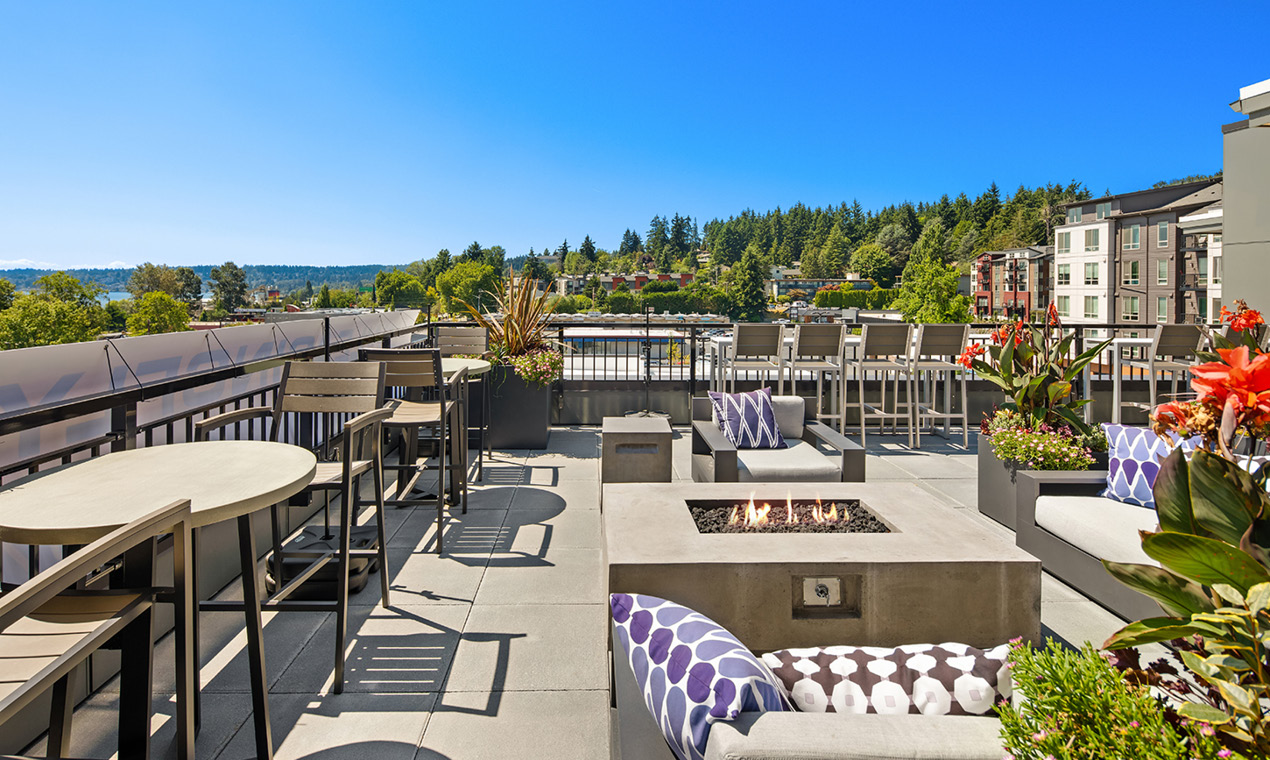 Last Friday, we held our annual Company Meeting – this time virtually! Since we couldn't meet in person, we brought the party to our employee with custom DAHLIN branded boxes that team members could open throughout the live event. Each team presented their key projects in a unique and entertaining way, and we celebrated team member anniversaries and promotions. We missed seeing everyone in person but are grateful we could still get together and celebrate all our accomplishments. We look forward to 2021!
Read more

The #AmericaAtHome Study, featured in USA TODAY provided insight from 4,000 respondents across the US about what home meant to them, how they were using their homes, and what they would be willing to pay for in a new home. https://bit.ly/3oCKXw5 For the next step of the study, DAHLIN is teaming up with Garman Homesto design a concept home in North Carolina. Follow along and learn more about the America At Home study here: https://americaathomestudy.com/ Credit to: Nancy Keenan, Teri Slavik-Tsuyuki, Belinda Sward, Alaina Money-Garman. Kantar, Colleen Stapleton Sharp, New Ground PR + Communication, Garman Homes
Read more

DAHLIN Senior Associate Ryan White was recently installed to the Building Industry Association - Orange County Chapter Board of Directors, marking his fifth year serving on the board. “It has been great to volunteer to be on the BIAOC Board of Directors for the past 4 years and I'm excited to have been installed for my 5th year. I'm looking forward to what 2021 will bring and how I can help our great building industry as a Board Member." – Ryan White Congratulations on this milestone achievement and thank you for your outstanding leadership! www.dahlingroup.com
Read more